i will continue this story at a later date

i had to have my transmission rebuilt so i found a shop, and i knew instantly the bossman was a tyrant. the first day i baked the workers a cake and good lawd you would think i had given them gold. the 3rd day i brought them all hamburgers from the little gas station/convenience store, just to say i appreciated them and “thank you”.  i know its hard work and not easy working in a warehouse in 110 degree weather. well, the office/parts guy…James…i got to know fairly well.  my car, due to some issues, was there almost 2 weeks, but he would never make eye contact with me.  i said, james why don’t you make eye contact with me, is it because i’m a white girl? (James is a black man).  he laughed a genuine laugh as he looked at the floor.  i continue without skipping a beat, i have found its one of 2 things you’re either telling me a lie or your feel unworthy to look people in the eye.  his shoulders slumped a littled lower and he looked over his shoulder even further…only then he raised his head and he looked at me but..sort of..he just looked past my cheek and said, mzs dyer the first time i recall looking at someone in the eyes i guess i was maybe 4, 5 years old, the next thing i remember i’m looking up at the ceiling and i hear my daddy say, boy don’t you ever look at me again.  i stood there in absolute humilty and i am sure he saw the looked in my eyes….shock.  he said, i have lived my whole life looking at the ground, my name isn’t even James, my employeer gives us names to use.  my mother left when i was eight and my father never had one word to say to me that wasn’t of the meanest spirit. i took all the beatings for my brothers and sisters,  i failed in school because i was too insecure to even speak to the teachers, i quit, began odd jobs and one person after another replaced my father.  i just finally resolved i was meant to be below everybody else.  when i was younger i questioned why my father hated me so much, until it just didn’t matter.  i asked him did he have kids? he said, no… he didnt trust that he could give them the life a little child deserved.  i say i stood there with humility because i stood before a giant, a man of 56 years that was still standing, after being kicked and knocked around his entire life!!  to have that kind of will of spirit….i felt about an inch tall.  i felt tears well up, i asked him his real name, then i said his name, “your father, took, a moment in your life, but not every moment.  i see you, and i find worth in your life and you have not gone un-notice by God, i’m told he binds Himself with those who are crushed in spirit”…..and i drove away, in utter shambles.  like my father, james had fallen prey to a darkness that bound him, and had choked the life out of him, he had no freedom, no laughter of spirit, he was heavy hearted, his ability to received love had been twisted, messed up, stolen. he’d been disposable….used and dumped and now we have an adult walking around with the all the pieces of the wounds…his father sliced so deeply!

i had not suffer the hand of abuse from my father but i had felt the deep pains of loving them both and not being able to save them.  i had felt pain so deeply i would feel, at times, i couldn’t bear under the weight..  it would cause me physical pain,  it would eat at my soul, it would become my every thought.  my saving grace was my mothers love for the church and at an early age i found a place of refugee. in the quiet moments i would find myself curled in my bed begging God to save our family, save my father and save my mom.  at those moments  it was such an oxymoron…we had such great love in our family and security, my father was such a great protector, loved so deeply and had gvien me such a gift, a gift of himself, a gift of a beautiful love story!! he formed how i would chose my husband, keep my purity, save it for the one i pledge my life to, yet, also a gift of the violence and a gift of seeing him digress day by day as my mom drifted further and further away, losing herself in the hopelessness and desperation, as her grip on my father and our life was slipping away.  i saw the most joyous and free spirited person turn into a broken and detached women.  so i knew what it was to see the ones you love suffer and fall under the burden of pain.  but, i, unlike james and my father, had been spared, God had had his hand on my life from a very early age…then, just like with james, i was able to insert myself into his life, bring some solace, some hope into his life. i feel we are a small portion of heaven spread out on the earth, meant to be representatives of God…use the pain we have had in our own life as a platform, a way to touch people, that without those experiences of our own pain,  i don’t think it would be possible to touch.  my granny always said, your life is what draws people to you Shug, which is short for sugar.  use your life and how God smiled on yur life to bring peace to those who are hurting and broken.  i can’t share my story with everyone i meet, but, i can be aware,and i can say, thru this simple blog,

seems like all i could see was the struggle

haunted by ghost that lived in my past

bond up in shackles of all your failures,

wandering how long is this gonna last

then you look at this prisoner then say to me son

you set me free

so i’ll shake off these heavy chains

wipe off all the stains

i’m not the man i use to be

all my life i have been called unworthy

named by a voice of my shame and regret

but when i hear you whisper child lift up your head

you set me free

i shake off these heavy chains wipe away every stain

I’m not the man i use to be

his day is long dead and gone

i’ve got a new name, a new life i’m not the same

a name that will carry me home

i am redeemed you set me free

i’ll shake off the heavy chains, wipe away every stain,

jesus i’m not who i use to be

cuz, i am redeemed

if all you see is the struggle…you will live with the ghost of the abuse you lived though, chained to a decision you made.  i was speaking at a conference and after i finished a beautiful little teenage girl came up to me weeping….she tells me she lives everyday wanting to die because she killed her unborn child.  she had an abortion.  she had loved the boy who was the father and it had been her only experience. her friends told her it wouldn’t hurt, it would be the best thing, due to the gapping wound she and her lover had not been able to handle the guilt and had broken up. she had began sleeping with anyone who would have her.  she was bound to her pain, her guilt, her shame.  she asked if god could ever forgive her? i held her, told her to lift up her head, she just had to forgive herself. she was free, the moment she whispered His name, now you have  to free yourself.  you can be free of the heavy load of your past, don’t be bond to the past…shame, regret, unworthiness….and don’t allow your future to be ruined. God meet me in those moments of pain when i thought i couldn’t continue on, He always came when i called.  just as i told james, and i will tell you, He will bind Himself to you, all you have to do is allow Him into all the recesses of the soul, He and He alone can restore a soul that has been crushed under the weight of a disolving marriage, a family that is being crushed by financial crisis and will soon face being seperated,  He can restore a soul that is told it is worthless, He can restore a girl to Him, that has carried the burden of her lost child, and restore her dignity and honor, yes, dignity! God brings dignity and honor to those who call on Him.  He is a restorer! not a thief! search until you find Him, search for Him, he is the redeemer! 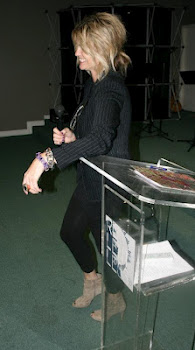 Angie speaking to a gathering of women